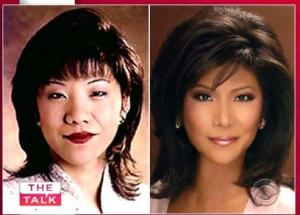 I was speaking to a wonderful friend last week when the conversation veered toward the topic of ethnicity. He shared with me how weird it is that people will often come up to him and engage in conversation by poking fun at his Asian heritage. These friends were not Asians who are “bagging on” his ethnicity… these are his “white” friends. I suppose the upside is that they think they are close enough to my friend that they can poke fun AT him. The downside is that it has a horrible after effect.

Last week it came out in the news that Julie Chen, a very talented and visible Asian-American told a story of how, under a certain kind of pressure from her boss in the newsroom, had a medical procedure done to widen her eyes. You know… make them look bigger. She was a reporter in Dayton, Ohio, and well, Dayton is not known to be a bastion of Asian Americans. So the applied pressure was, as I am paraphrasing the conversation, “Julie, don’t you want to be relevant to your viewers (hint… hint… who are not Asian)? Your eyes make you look disinterested (read “slanty eyes”) and you will always be marginalized if you aren’t relatable to them.”

What is it about Asian people that she would actually cave to this demand? Would you give in, if the majority of your clients were African-American and your employer came to you and said something incredibly ignorant like, “You need to change a facial feature because people can’t relate to the way you look.” But Julie Chen caved. Why? Because Asians have this drilled into them by their culture and their parents… “You must succeed!”

I remember what it was like for me as a high schooler. When I realized that the “white” guys were getting all the cute girls.. So when I looked in the mirror I would intentionally make my eyes bigger thinking that if I “looked” like them I would be successful. Strange. Sociologists who study Asian-Americans and the problems they face in melding into the “mainstream” call this a kind of self-loathing. You want to succeed so bad that you will do what you need to do in order to get in the mainstream, get the job, be accepted. But the self-loathing comes in because it sometimes includes compromising who you are or laughing at yourself in a hideous way. For many Asians, it is a lonely experience trying to fit in while yet at the same time denying who they are.

In my own life experience, I have found that the only thing that brings security on my part and sensitivity on the parts of others is good news, the gospel. I don’t view the gospel as something I slap on a problem and say, “Now everything is better.” No, the gospel is understandable yet so nuanced and complex that it continues to get worked out in life. This good news, the gospel, confronts my neurotic desire to fit in and succeed. I will never succeed and fit in like I want to and will always find myself chasing approval. The gospel emphatically says that I am completely approved of because of the actions of the One on the cross. But the gospel also confronts others who think that insensitive joking or simply being a prejudiced fool, by announcing that the cross has bridged the chasms between Jew and Gentile, ethnicity, gender, and socio-economic status are rendered null and void (Gal. 3:28). There is one thing that draws us together in unity and that is Christ.

I hope that this will lead to a deepening of my own roots in the gospel while also helping people understand that they don’t need to be hyper-sensitive around me. But leading with ethnic jokes and bowing (unless you understand the Japanese formality of bowing) is not just uncool, it’s actually an affront to the gospel that we claim unifies us.