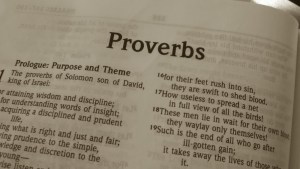 There was a time on Facebook when people were posting these self “inventories” – which state do you belong in (mine was Colorado), which decade best fits you (I grew up in the 70’s), and which Disney princess are you (I don’t even want to know…). I’ve been giving some thought to my own kind of inventory – which kind of Proverbs person are you? Over the next few blog posts I’ll try to offer some characteristics of people described in the book of Proverbs might give you some insight to where you are at.

I’ve had a long fascination with the Proverbs as not just fortune cookie kind of “wisdom” but actual wisdom on how to live life. The Bible indicates that there are two roads in life (Matt. 724-27): one is the wise road and one is the road of folly or foolishness that leads to death. In other words, we are on one road or the other and the stakes are pretty high, so much so, that if you are a risk-taker, it should cause you to pause and reflect.

If you start reading from Proverbs 1, it’s clear there is a “fabric” to life. Living life consistent “with the grain” of life leads to well-being while living “against the grain” will lead to despair – separation from others, from God and from life itself. In fact, what should be readily apparent is how unforgiving life can be when we make foolish decisions and compound them with more foolishness. Even if it seems like people get away with a life contrary to the one the Proverbs lay out, reflection should lead a person to see through the veneer. As you look at good and nice people, life might seem to go well for them but in actuality they are lousy and empty people…

Two quick things about wisdom. First, wisdom isn’t the same thing as gaining information. In other words, you can be incredibly smart but still foolish. You can know a lot about poverty yet be incredibly reckless in how you approach the complexity of it. You can know a lot about God while being incredibly dull when it comes to the reality of Him in your life. Second, becoming wise is a long process, like a journey, where one is traveling and accumulating wisdom. In fact, Proverbs is about training us to move from being a certain kind of dull person to a person who is wise, who has a certain competency (or skillful) in living life the way God made life to be lived (reality).  Gerhard von Rad described wisdom as,

“Wisdom is becoming competent with regard to the realities of life.”

One very quick aside. As von Rad states, wisdom actually makes one skillful in living in reality, or ordinary life. So whatever Judaism (and later Christianity) is, it’s not an escape from reality. I’m not sure where the image of the wise Shaolin priest came from, but Eastern religions are actually less connected to reality.  In a fascinating blog from 2003, John Horgan, a former Catholic, described why he decided to ultimately leave Buddhism behind. While Horgan comes from a religious background, he holds to scientific naturalism (that is, science provides the best method to describe what’s true about the universe and hence, it’s strictly about the material world). We might argue whether Horgan understands Christianity well, but the main reason why he ditched Buddhism is most important.

“But what troubles me most about Buddhism is its implication that detachment from ordinary life is the surest route to salvation. Buddha’s first step toward enlightenment was his abandonment of his wife and child, and Buddhism (like Catholicism) still exalts male monasticism as the epitome of spirituality. It seems legitimate to ask whether a path that turns away from aspects of life as essential as sexuality and parenthood is truly spiritual.”1

The Proverbs put before us five categories – the simple or naive, the rebellious teenager, the lazy “dupe”, the scoffer or mocker, and the wise. There is a bit of overlap in the “foolish categories” but there seems to be a spectrum of severity from the rebellious fool to the lazy fool to the mocker. So the point of the book (consistent with a Jewish understanding of wisdom) is to get insight into people, particularly older to younger. It’s really about the process of discipleship or becoming the right kind of person who learns a particular skill – how to live life. In the next blog, I will start laying out characteristics of each of the people described. Maybe it will help you assess where you are in terms of foolishness and wisdom in order to become a better disciple.

2 thoughts on “What Kind of Proverbs Person Are You?”