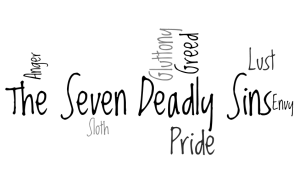 I love a good deal. My wife can tell you that for some things I like bargaining for the lowest price (on trips overseas it’s not the price.. it’s all about dickering!). But as I’ve been thinking about Black Friday, what is it about a day that often brings out the worst in people all in the name of consumerism and a good deal?

I’m not trying to guilt people into staying home on Friday (or Thursday night) but I have been thinking more about how consumerism influences our mental map of how we see the world, our relationships, God, as well as the effect it has on our soul. I’ve been reflecting on how events like Black Friday actually foster vice (ignoble and ugly character habits) and not virtue (noble, wonderfully beautiful character habits) in a person.

What should be of great interest to us is that unchecked consumption has been publicly denounced by Christians of all ages, backgrounds, time periods and theological persuasions. I couldn’t identify one thinker/theologian who thought consuming more and more was basically a good thing1. In fact, they seem to emphasize just the opposite – virtues like simplicity and contentment with sacrificial charity, were highlighted. Sören Kierkegaard once wrote,

“With respect to physical existence, one needs little, and to the degree that one needs less, the more perfect one is.”2

Focusing on consumption is an unhealthy way to move through life, with its tentacles reaching even into our practice of our faith (in other words, you treat your faith much like a consumer transaction between you, God and church). I’m not trying to put an end to our shopping habits or coming across in a legalistic way. Nor am I denying that everything created is a good gift from God (James 1:17). It’s simply meant to help us pause this year, take a breath and reflect, especially if the justification is, “But we do it because everyone else does!” So here are the seven deadly sins plus one for this Black Friday…

8. Luxury or lust. This is the desire for pleasure that is given too much strength, not in the right context, and not toward the right thing. Lust just doesn’t have to be a sexual thing. It’s an over-desire for anything other than God. Isn’t this really what the advertising does to us? It ramps up a desire for something using “deals” as the way to motivate and justify our behavior.

7. Gluttony. The thinking is if a little bit of merchandise is good for you because you’re saving money, then more must be better. A few years ago, I remember feeling sick to my stomach watching people rush around Best Buy with shopping carts literally throwing things in once the door opened. Even when it comes to “saving money” (that’s being debated whether you are actually getting good deals) there doesn’t seem to be an end. Read this CNET article if you don’t really believe the economic myth of Pamplona-like shopping: Is Black Friday Worth It?

6. Sloth. This is also called acedia, and it wasn’t just laziness like laying around the whole day watching endless tv on Netflix. Sloth can include the idea of being spiritually passive by letting other forces control you. It’s the passive “whatever” or punting to “everyone else does it”. These outside forces guide the formation of your soul in not becoming who you were made to be. Maybe we should pray on Thursday night, “Help me to be grateful and content. At the core of my identity, I am not a consumer.”

5. Wrath or anger. Trying to fight off other shoppers begins in the parking lot. How many times have you, while searching for a place to park, had someone cut in front of you but you then blessed them? How many of you have blessed other people in the store with a kind, “No, after you”, when looking at “doorbusters”? The day is constructed to create a certain amount of madness, frustration and anger and when you feel this it is impossible to bless other people.

4. Greed or avarice. This is the “over-desire” to accumulate a good and hoard or keep it for yourself. Thomas Aquinas thought this was an especially destructive sin because he saw it as an offense to God and His self-giving in the gospel. In “over-desiring” the best deal possible for material goods you can end up being in competition with others for those same goods.

3. Envy. Have you ever felt discontentment after shopping? Envy keeps us immature because we never end up being completely satisfied with what we have. Days like Black Friday, while it might have some value, actually can end up leaving us feeling more empty because our needs are never completely satisfied. There’s always more to buy! You can never drown yourself in enough stuff to completely satiate your need for more.

2. Pride. This is the elevation of self before others. It’s not just admiring yourself but placing yourself as the center of activity with everything revolving around you. The six other vices are connected to pride in some way. It doesn’t take much thought to see that Black Friday is under the guise of “giving to others” but, honestly, it’s about you.

And finally, you might suffer the indignity of losing your stretchy pants rushing to buy something incredibly “valuable”. The worst thing possible is that in the frenzy of buying something as valuable as a $3 waffle iron, you might end losing not only your pants but also your humanity …

So this year, as we enter into Thanksgiving and Christmas, let’s all pause and take a deep breath. Be thankful to God while also learning to be content. The gospel is the good news that the Father gave of Himself by sending His Son so that we would not be defined by what we accumulate but by Christ’s work on our behalf!

1 This is, in fact, one way we can tell where some teachers are on the wrong theological track. Anytime someone teaches that more possessions is a spiritual sign of faith and God’s favor, you best proceed cautiously in accepting the rest of their teaching. The fact that they oppose such a wide representation of Christians should tell us that they are in the minority and we are justified in being suspicious of prosperity theology.
2 Sören Kierkegaard, Eighteen Upbuidling Discourses