“If more of us valued food and cheer and song above hoarded gold, it would be a merrier world.” (Thorin in J.R.R. Tolkien’s The Hobbit)

A few weekends ago Kay and I went out to dinner with some couples here who are fast becoming good friends! We gathered for a Christmas dinner in Chicago (Inspiration Kitchens)  to celebrate working together in the small groups ministry. We were served a sumptuous five-course meal over a two-hour period accompanied by long periods of laughter and conversation. We ate and drank slow enjoying the feast as it was unfurled before us with the arrival of each new course! I could go on and on about how the experience took eating to a new level – the presentation of the meal, the manager’s and staff’s attentiveness, and the restaurant’s mission. But I began to think of something else…

I have been thinking about this for awhile now, in part from conversations with old Fullerton friends, but the spread of food laid before me during that meal served to remind me that while there are positive efforts to bring a biblical theology to the “big areas” (e.g. sex, personhood, ethics, gender) there is as big a need to bring robust theology to the mundane or ordinary. I’m thinking specifically about work or vocation, leisure, and as it relates to my thoughts here, food! This is very good news for my friends who enjoy good food, who are crafting their own beer or roasting their own coffee!

From the very beginning of Genesis, God told Adam and Eve they could eat from any fruit in the Garden. Food has value first and foremost because it was originally given as a good gift of 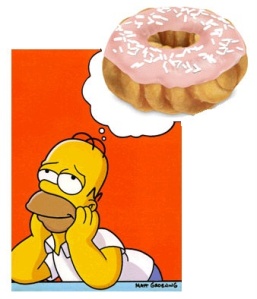 grace to us from God. The sight, smell and taste of food does something to us similar to Homer Simpson when he enters a semi-catatonic state even thinking of something as delightful as a donut… Mmmmm… donuts… If you doubt me, think for a moment about what foods speak “comfort” to you?

Food was not not only a gift of grace from God in the creation account but it was also central to the Fall. It was the fruit from a particular tree that was used as the centerpiece of temptation to lure men and women into a life of self-subsistance apart from their Creator. Think of how food is used today in a broken culture gone haywire. From anorexia to gluttony to inexpensive, highly caloric food substitutes, food is central to consumption not just as fuel or sustenance but also as something that gives us a profound sense of identity. Look at the magazines and cable shows dedicated to food! There is something playful about Adam Richman but in the contest of Man vs. Food, it’s gluttony that always wins…

While our approach to food is certainly tainted by the Fall, food is still a good gift from God! Ok, maybe except for fruitcake. Remember Peter’s dream in Acts 10? As the gospel was to be announced to the Gentiles, Peter dreamed of a sheet coming down from heaven full of animals, as if he saw the Gentile menu floating toward him. Eric Swanson, my former director and boss with Campus Crusade likening it to a dream of seeing delicious pork BBQ and lobster fall from the sky! Of course, even with our foodie and health-driven culture it can be taken to a level that borders on obsession, snobbery or even idolatry. However, there is something about enjoying good food and drink that is still in play today. Why is this true?

When Jesus tells us to regularly take part in remembering His sacrifice for us, we share in His body and His blood using bread and wine. For the Jews this was part of the ritual called the Passover meal. In other words, Jesus uses the very “stuff” that sustains us as a reminder that He is the source of our life and the ultimate cost He paid that we might be reconciled to Him. Food as a gift from God is to always to lead us to the ultimate gift of grace God has given… His Son. This is why we say “grace” before a meal. Food is the ordinary picture of God’s daily grace toward us in Christ.

The end of the biblical narrative announces that He is coming back one day to usher into to a banquet hall where we will take part in an exquisite feast. In other words, you’re not done with food when this earthly life is over! The fullness of your experience in the heavenly Kingdom with God is captured in the picture of feasting, often called the Marriage Supper of the Lamb. When we eat slowly, in the company of good friends (that’s so Middle Eastern), enjoying each bite as a gift from God, with conversation around the table and partaking in good drink, we are preparing ourselves for the Ultimate Feast that we will experience one day with the Groom and with each other!  What’s mind boggling is food is used as the context for union with God! And so… bon appétit!

One thought on “Thinking About Food…”