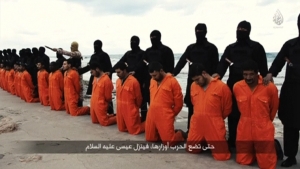 One memory that will always stand out in my mind was sitting in my kitchen with a bunch of Colorado State University students. We were just shooting the breeze making Christmas cookies (I know…) talking about where in the world we would consider serving the Lord. Then the question took a more serious turn when someone then asked, “If there was a place in the world you would consider being martyred for the faith, where would you go?” After an initial laugh, it was clear to me that these students were very serious that they would consider giving their life for the gospel. Now I haven’t held them to that because there are twists and turns from God’s hand that certainly changed their lives. However, since that time, it’s made me much more sensitive to current examples of men and women giving their lives because of and for the sake of the gospel.

It might be hard to comprehend this, but when twenty one Coptic Christians were beheaded by members of ISIS a few weeks ago, it’s important to realize this is not an isolated event in our world. While we in America tend to insulate ourselves with everything around that distracts us and provides comfort, there really are brothers and sisters in Christ around the world who lose their lives simply on the basis of their Christian faith. I remember times even in Calcutta, India where we had to proceed with caution when sharing the gospel not because of what might happen to us but what might happen to the pastor once we left.

Statistics tend to vary largely because the definition of martyrdom lends itself to somewhat of a wider interpretation. For instance, the standard definition of a martyr is “believers in Christ who have lost their lives prematurely, in situations of witness, as a result of human hostility” (David Barnett and Todd Johnson, World Christian Trends, 2001).  Because the phrase “situations of witness” is left open to some interpretation, the number reported can range between 1,000 and 100,000. While that represents a huge gap, there is no argument that today Christians still are martyred for their belief in hot spots of persecution like Nigeria, parts of the Middle East, Indonesia, and even China.

How, as followers of Christ, should we respond? I think to take a moment to pray for the families of those who were killed. If you want to see how unique the Christian response was to the horrific acts in Libya, watch this video of the brother of one of the slain Coptic Christians (here). Pray as well for those who perpetrated such a horrific act that God would lovingly reveal Himself to them.

But there’s also a way that you can be unified with them. Take some time to reflect with God about the cost of being a follower of Christ. When Jesus says that there is a cost to following after him (Matt. 16:26; Luke 9:23-26; Luke 14:25-33), what does that mean for us today? Specifically, how is that expressed in your life? I won’t presuppose that I know what that’s going to look like for you. Certainly the grace of the gospel is given freely but it also was costly. Ponder the idea of God’s grace linked to  discipleship, justification to sanctification, and what happens when they are uncoupled because of complacency. While Bonhoeffer is certainly speaking to us out of a particular historical context, what really are the small and large ways that it costs us to follow Christ? In the words of scholar Mary Vanden Berg,

“The misunderstanding of “cheap grace” (quotes mine) that is, grace that justifies sin but not the sinner (“well, you know that’s just how I am and God will forgive me”), grace that entails no change in the person, is a misunderstanding that threatens the very life of the church.” (Mary Vanden Berg, Bonhoeffer’s Discipleship: Theology for the Purpose of Christian Formation, CTJ 44, p. 333)